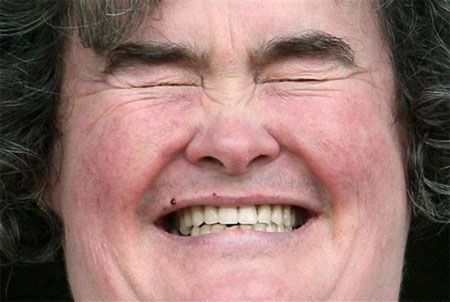 The pressure is getting to Susan Boyle, according to Brit tabloid The Sun: 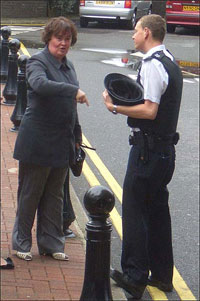 "Cops intervened at 5pm yesterday after Susan, 48, went berserk in the lobby of
the Wembley Plaza Hotel in North London when two strangers set out to 'wind
her up'. The Scottish singer was heard to roar: 'How f***ing dare you! You can't f***ing talk to me like that.'

One of two cops stationed at the hotel went up and asked: "Is there a problem?"

Tears flowing, she turned on her heel and marched out the exit followed by her family, production staff and the cops"

The paper reports that Boyle later made a dramatic display at a BGT viewing party with rival singer Shaheen Jafargholi and his family:

"One onlooker said: 'Susan was sitting there quite happily with her drink at first. She got a bit annoyed when a busload of tourists asked for autographs and told them to wait until Shaheen had finished. She was smiling as Shaheen sang but afterwards, when Piers started praising him, Susan went nuts.

"She got up, did one of those strange wiggling dances that she does, and then stuck two fingers up at the TV. Then she marched off. We didn't see her again.'"