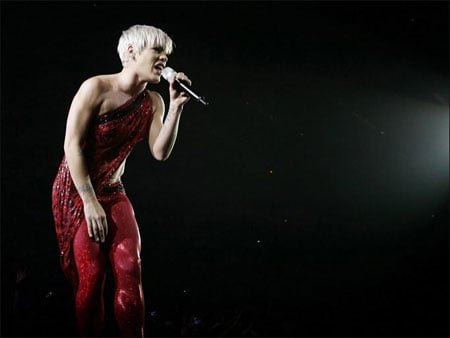 On Saturday, Britain's News of the World tabloid reported that Pink came out as bisexual. "I'm not embarrassed about being bisexual. This is who I am. Love is pure and I try to keep it that way. This is who I am, what I
feel. I think it's unnecessary to draw the subject out, but I think it even more
stupid not to discuss it. It seems as if bisexuality is a trend and I should whip up the masses. Well,
I don't believe in trends, I just believe in me," they reported her as saying. 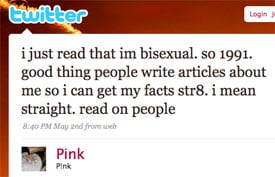 The NYDN reports: "Pink's rep tells the Daily News that the interview was 'entirely fabricated.' The singer was cagey about the story on her Twitter
page, writing, 'I just read that I'm bisexual. So 1991. Good thing
people write articles about me so I can get my facts [straight].' Pink has previously insisted that she wasn't into the idea of having a same-sex romance 'I'm
not gay so I guess I would not try a relationship with a woman,' she
told NOW magazine last year. 'I didn't say I haven't experimented, but
I love men too much to make it a permanent thing.'"