Radio 2 host Jonathan Ross has been criticized for remarks he made during a show on Saturday when he made jokes about prizes in a Miley Cyrus 'Hannah Montana' contest. 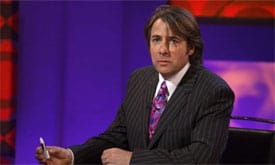 Said Ross: "If your son asks for a Hannah Montana MP3 player, you might want to
already think about putting him down for adoption before he brings his,
erm, partner home."

The Press Association reports: "A spokeswoman for Ofcom was unable to say how many people had
complained but said: 'We have had complaints. We are assessing those
complaints against the broadcasting code.' … A BBC spokeswoman said: 'The BBC has received four complaints about
Jonathan's comments on Saturday's show. However, these off-the-cuff
remarks were made purely in jest and were not intended to be offensive.
Jonathan is not homophobic in any sense and never meant for his
comments to be taken seriously.'"