Obama's now resoundingly criticized Department of Justice defense of DOMA brief could not have come at a worse time for a Democratic Party LGBT fundraiser headlined by Vice President Joe Biden scheduled for next week in Washington D.C. As you may have read by now on Politico, Americablog, or Pam's House Blend, I had planned on attending but early yesterday made a decision that I would not. I wrote DNC Treasurer Andy Tobias (who is a friend outside of any professional relationship we have) and told him that I did not feel at all good about the lack of movement within the Obama administration on LGBT issues and given the content of the Department of Justice brief I could not attend in good conscience. My colleague, Towleroad's political director Corey Johnson, is not attending either. 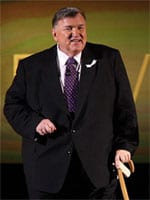 David Mixner has bowed out as well, he wrote yesterday:

"I will not attend a fundraiser for the National Democratic Party in Washington next week when the current administration is responsible for these kind of actions. How will they ever take us seriously if we keep forking out money while they harm us. For now on, my money is going to battles within the community such as the fight in Maine or the March on Washington! I am so tired of being told by Democratic operatives to 'suck it up' because so many other profound issues are at stake. It is as if our fight for our freedom is single handedly responsible for the fate of all other issues. Bullshit. Maybe, just maybe, it is time for others to 'suck it up' for us and finally, without conditions, join our fight for our freedom!"

Alan van Capelle of the Empire State Pride Agenda has told John Aravosis at Americablog that he too has pulled out.

Tobias, who agrees with those critical of the brief, still believes that the President meant what he said in his promises to LGBT people, he told Politico today: "If this debacle of a brief represented the President's views, I'd
boycott too. [I] [t]otally understand all the hurt and anger, thought Joe Solmonese['s] letter
to the President was spot on. Still personally totally believe in the
President. His Pride Proclamation, and his call to repeal DOMA, are
genuine."

Pam Spaulding, who published a leaked list of those scheduled to attend, has called upon her readers to ask Barney Frank, Tammy Baldwin, and Jared Polis and other leaders why they are attending.

Writes Ben Smith: "Organizers, I'm told, are scrambling to get visible White House action
on gay issues in advance of the June 25 dinner to prevent it from
becoming a protest stage."