This morning, a press conference was held outside New York's historic Stonewall Inn by grassroots online group The Power announcing its LGBT Civil Rights campaign for full equality. At the presser, the group  presented U.S. Congressman Jerrold Nadler with a signed petition for House Speaker Nancy Pelosi to expand the 1964 Civil Rights Act to include LBGT status. 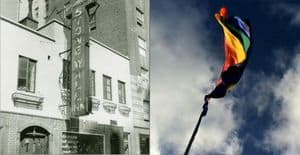 Updated: Statements by prominent leaders, AFTER THE JUMP…

The group writes: "As President Obama prepares to host a cocktail reception at the White House for lesbian, gay, bisexual, and transgender leaders, prominent activists and fundraisers return to the Stonewall Inn on the 40th Anniversary of the Stonewall Riots to announce a new comprehensive LGBT civil rights agenda.  At that time they will also present U.S. Congressman Jerrold Nadler with signed petitions from all 50 states and 36 countries supporting expansion of the Civil Rights Act to include LGBT people, marking the official launch of The Power’s nationwide petition drive and campaign demanding full equality now."

The petition will be accompanied by statements of support from prominent lawmakers and LGBT leaders. A list, is AFTER THE JUMP…

ThePowerOnline.org petition drive seeks to expand the 1964 Civil Rights Act to include LGBT Americans. It has sparked positive responses from prominent elected and LGBT leadership:

“Discrimination against LGBT Americans is the last legally and socially accepted form of discrimination in this country. This is an abomination and cannot continue. We will never be a fully democratic, fully humane, fully just nation of laws until all of our citizens—whether gay, straight, transgendered, black, white, Asian or otherwise—are granted full civil rights and equality before the law.”

“Extending the enforcement powers of the Civil Rights Act of 1964 to cover LGBT Americans is absolutely the strongest and most fundamental way to protect our civil rights—this is so long overdue! My mother, former Congresswoman Bella Abzug (D-N.Y.), was the first person to introduce a bill (The Equality Rights Act) in Congress to do this, way back in 1974,” Abzug continued. “It is simple: We must demand and finally achieve this expansion to the Civil Rights Act of 1964 now!”

“Dr. Martin Luther King once declared the ‘fierce urgency of now,’ which this president has invoked throughout his campaign and his administration has reclaimed again and again, But lesbian, gay, bisexual and transgender Americans continue to face discrimination under the law. The urgency IS now. This is not an issue of states deciding for themselves.  This issue is for equality and justice for all Americans, including those of us who are lesbian, gay, bisexual, or transgender.”

“I am proud to support the effort to expand federal civil rights law to include sexual orientation as a protected category in areas such as housing and public accommodations. Equal rights do not stop at the workplace door, and it is high time that the principle of equality was extended to lesbians, gay men, bisexuals and transgender persons in every aspect of our society and our laws.”

“We would like to thank the Civil Rights Project and the The Power for this moment. Transgender identity is not covered in court by sexual orientation, not in 1974 and not today.  Trans people lose case after case as lawyers easily prove that changing gender identity is different than being gay and not protected. Simple additional language to the Civil Rights Bill can ensure that all Americans are legally protected in America, regardless of sexual orientation or gender identity.”

“I congratulate ThePoweronline.org for their efforts in expanding the Civil Rights Act to include all LGBT people. In 2007 we saw our community come together to fight against the divisive actions of some in the Beltway. We can work together, we can do more! The seeds for a new paradigm were planted and  now focusing on this Act, while we make sure to take care of the matters at hand, extends our reach and our goals for true, meaningful, and comprehensive equality!”

“It’s time to extend every basic right and freedom to each and every member of America’s LGBT community. In 2009, it is unconscionable that gay and lesbian couples are held back from pursuing all of their dreams. The direction that our history is moving in is clear – it’s time our policies caught up with it. I look forward to the day when New York and all states accept this basic principle of fairness, and I pledge my commitment to getting it done, and that’s why I’m proud to support this petition.”