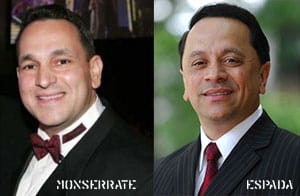 "A raucous leadership fight erupted on the floor of the Senate around 3 p.m., with two Democrats, Pedro Espada Jr. of the Bronx and Hiram Monserrate of Queens, joining the 30 Senate Republicans in a motion that would displace Democrats as the party in control. It was a noisy and acrimonious scene on the floor of the Senate as Senator Thomas W. Libous, a Republican from Binghamton and the party’s deputy leader, shouted for a roll-call vote, while Democrats attempted to stall the vote by asking to adjourn the session. All 30 Republicans stood with their hands raised, signaling a vote for a change in leadership. Mr. Espada and Mr. Monserrate joined them, each raising his hand. It appeared that Republicans had won the vote by a 32-to-30 margin. If the Republicans retake the chamber, Dean G. Skelos, of Long Island, would likely be the new majority leader." 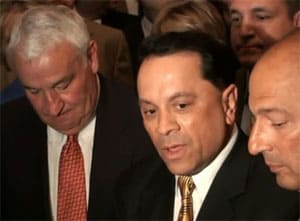 "The deal that enabled the Republicans to woo Democratic Sens. Pedro
Espada and Hiram Monserrate to their side in today's coup has been
months in the making and will result in an unusual degree of
power-sharing in the chamber, according to one insider with knowledge
of the deal. Assuming it all holds – and that isn't a foregone conclusion (I smell a major lawsuit) – here's what we know: Aside from Democratic Senate President Pedro Espada Jr., shown here
being sworn in to his new leadership post along with Senate Majority
Leader Dean Skelos in the wake of the coup, there will be as many as 10
Democrats who get committee chairmanships."

At this point there's no real evidence that this chaos erupted over the marriage equality bill. Espada is pro-marriage equality and Monserrate, at least according to the recent NY1 survey, is undecided.

Assemblyman Daniel O'Donnell told New York magazine he's not giving up hope: "I believe that it's still coming regardless of who controls the Senate. Every year more Americans and more New Yorkers support my right to a marriage license.

Pedro Espada and Dean Skelos: Swearing in… The NEW RULES. 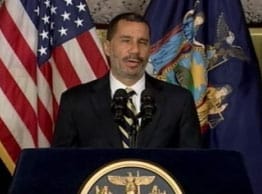 Governor Paterson gave a press conference late yesterday excoriating the Republican move: "The actions taken on the senate floor today need to be exposed for
what they are, an unnecessary distraction to government, dressed up in
the cloak – falsely – of reform and good government…I don’t care if I am the only one standing, but someone has got to stand up and say that this is wrong."

Swearing in video plus PRESS CONFERENCE with Skelos and Governor Paterson, AFTER THE JUMP…