Hakim Nelson and Jason Stenson were married on May 26 by the City of New York via a series of misunderstandings: 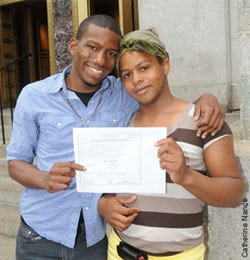 Nelson — who goes by the name 'Kimah' and hopes to one day have
surgery to become a 'full female' — wore an orange dress and white
leggings, his straight, brown hair falling to his shoulders. The gullible clerk didn't seem to notice that both Nelson, 18, and Stenson, 21, have male first names. They both had to present identification to obtain the license.
Stenson used his state ID card, and Nelson gave a state Benefit Card,
which he uses to collect food stamps. By a fluke, Nelson's ID card has an 'F' for female on it, because
the official who issued it in April assumed from his appearance that he
was a woman…Ten days after obtaining their license, the wedding crashers returned
to the office for the ceremony. They were clutching their license and a
pair of $10 silver wedding rings they had bought in the West Village…Then a third city official, Blanca Martinez, took their IDs and the
license. She printed out the marriage certificate and performed the
quick ceremony, pausing to ask Nelson whether she was pronouncing
"Hakim" properly. A friend served as a witness."

The City Clerk's office says the marriage is not valid.