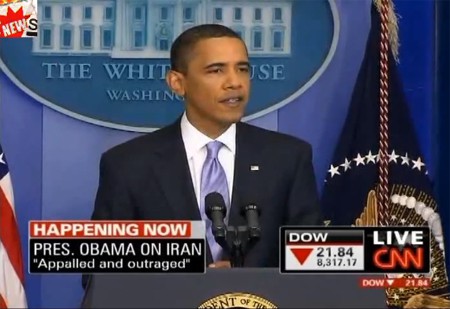 In a press conference today, Obama remarked on the situation in Iran, saying, in part:

"This is what we have witnessed. We have seen the timeless dignity oftens of thousands Iranians marching in silence. We have seen people ofall ages risk everything to insist that their votes are counted andtheir voices heard. Above all, we have seen courageous women stand upto brutality and threats, and we have experienced the searing image ofa woman bleeding to death on the streets. While this loss is raw andextraordinarily painful, we also know this: those who stand up for justice are alwayson the right side of history."

Later, he was asked a question, via Huffington Post reporter Nico Pitney, from an Iranian citizen.

Watch both clips, AFTER THE JUMP (transcript of HuffPost question below)…

QUESTION: Yes, I did, but I wanted to use this opportunity to askyou a question directly from an Iranian. We solicited questions ontonight from people who are still courageous enough to be communicatingonline. And one of them wanted to ask you this: Under which conditionswould you accept the election of Ahmadinejad? And if you do accept itwithout any significant changes in the conditions there, isn’t that abetrayal of — of what the demonstrators there are working to achieve?

OBAMA: Well, look, we didn’t have international observers on theground. We can’t say definitively what exactly happened at pollingplaces throughout the country.

What we know is that a sizable percentage of the Iranian peoplethemselves, spanning Iranian society, consider this electionillegitimate. It’s not an isolated instance, a little grumbling here orthere. There is significant questions about the legitimacy of theelection.

And so, ultimately, the most important thing for the Iraniangovernment to consider is legitimacy in the eyes of its own people, notin the eyes of the United States.

And that’s why I’ve been very clear, ultimately, this is up to theIranian people to decide who their leadership is going to be and thestructure of their government.

What we can do is to say, unequivocally, that there are sets ofinternational norms and principles about violence, about dealing withthe peaceful dissent, that — that spans cultures, spans borders.

I think it is not too late for the Iranian government to recognizethat — that there is a peaceful path that will lead to stability andlegitimacy and prosperity for the Iranian people. We hope they take it.