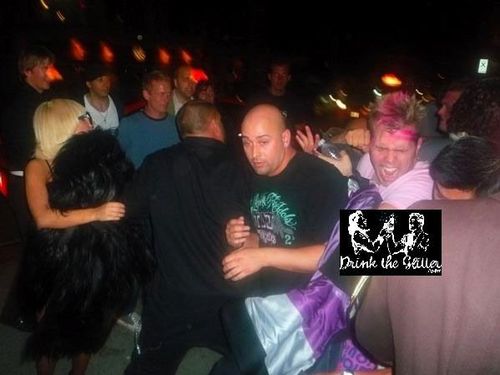 Following calls from GLAAD to apologize for using the word "faggot" during the alleged assault on him by Black Eyed Peas manager Polo Molina, Perez Hilton released a statement late yesterday.

Hilton's statement, AFTER THE JUMP…

Of course Bill O'Reilly and Greg Gutfeld of Red Eye had something to say about the incident.

"Words can hurt. I know thatvery well, from both sides of the fence. The other night in Toronto,after feeling physically threatened by a verbally abusive Will.I.Am ofthe Black Eyed Peas, I chose the most hurtful word I know to hurl athim. I was in an out-of-the ordinary situaton and used a word that Iwould not utter under normal circumstances. My intention – howevermisguided it may have been – was to stand up for myself and tell thisbelligerent man that I had enough of his badgering and was not going tocontinue to let him berate and intimidate me. I wanted to hurt him withthe word I chose, not anyone else. Unfortunately, the one who got hurtwas me and, subsequently, a lot of other people. I wish none of it hadhappened. I can't take it back. I did what I thought was best at themoment to stand up for myself in a non-violent yet still assertive way.

Clearly, I am not homophobic. Also, I am not nor have I ever claimed tobe a spokesperson for the gay community. I am just speaking for myself,a gay man. One who is labeled "flamboyant" in the media. An Americanthat is not granted equal rights under the law. I will continue tospeak out for equality and I will continue to say things that upsetboth gay people and straight people. Who I am as a person and what I dofor a living are two separate things. I've come to terms with all myincongruities and am proud of who I am and what I do.

In closing, wordscan hurt. But words should not provoke someone to violence. Strippedaway from the mask of Perez Hilton, I have been extremely bothered bythe public reaction to my assault. Violence should never be condonedwith such statements as "It's Karma" or "I don't believe in violencebut….". In fact, several television and radio shows over the past couple of days echoed the sentiment "Hehad it coming". Would they have said the same thing if I was a woman?Would I have "deserved it" if I had been stabbed? Or shot? Or killed? Iwas attacked from behind without warning and repeatedly punched in thehead in a cold, disgusting and unnecessarily violent manner by PoloMolina, the road manager for the Black Eyed Peas, who I did not evenspeak with that evening. I did not share any words with him and hisassault on me was completely unprovoked. I feel like everything happensfor a reason and I leave this traumatic experience as a person withmore compassion. Specifically, there was an instance last year whenactor Jesse Metcalfe was attacked outside of a Hollywood nightclub by afellow entertainer. I did not condone the violence, but I did makelight of that situation. I regret that. Sincerely.

There are many waysto deal with disagreements, both good and bad, but violence is neverthe answer. Never. I now know that first-hand. It should not becondoned, promoted or accepted. No one "deserves" to be the victim ofviolence. No one "has it coming." NO ONE. And victims should not beridiculed. I look forward to marching for equality in Washington, D.C.this October. And I look forward to standing up for my rights in aToronto courtroom shortly, as I fully intend to seek every lawfulremedy against the man that attacked me."