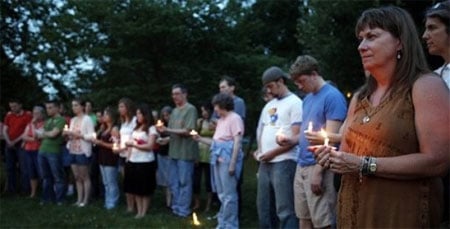 You've probably heard by now that Dr. George Tiller, a well-known abortion doctor in Kansas who had been a target of the right wing for many years, was shot to death in the foyer of his church on Sunday. The suspect has now been identified: 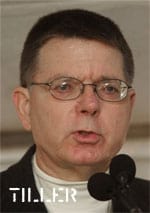 "Scott Roeder, 51, of Merriam, Kan., whom authorities have described as a suspect in Sunday’s fatal shooting here of George Tiller, the doctor who had been a focal point for abortion opponents for decades, was once a subscriber and occasional contributor to a newsletter, Prayer and Action News, according to Dave Leach, an anti-abortion activist from Des Moines who leads the newsletter. Mr. Leach said he and Mr. Roeder had met once, and Mr. Roeder had described similar views to his own. Of Dr. Tiller’s death, Mr. Leach said, 'To call this a crime is too simplistic,' adding, 'There is Christian scripture that would support this.' …Mr. Roeder was taken overnight to Wichita by law-enforcmentauthorities, who said it was possible that murder charges would befiled later Monday….Mr. Roeder was taken into custody later in the day bythe authorities after they pulled him over about 170 miles away onInterstate 35 near Kansas City. "

The right-wing campaign against Tiller was fomented by right-wing media outlets, most prominently FOX News host Bill O'Reilly. Salon reports: "There's no other person who bears as much responsibility for thecharacterization of Tiller as a savage on the loose, killing babieswilly-nilly thanks to the collusion of would-be sophisticated culturalelites, a bought-and-paid-for governor and scofflaw secularjournalists. Tiller's name first appeared on 'The Factor' on Feb. 25,2005. Since then, O'Reilly and his guest hosts have brought up thedoctor on 28 more episodes, including as recently as April 27 of thisyear. Almost invariably, Tiller is described as 'Tiller the BabyKiller.'"

Watch a compilation of O'Reilly clips on Tiller, AFTER THE JUMP… 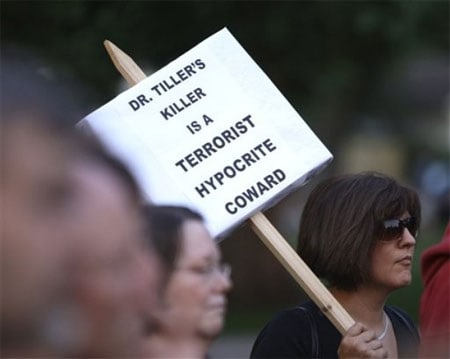