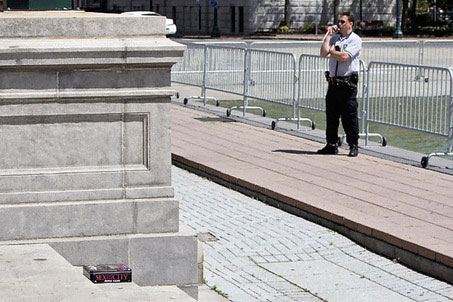 The terror alert level was raised to hot pink in Syracuse, New York yesterday, when a public square was shut down for more than two hours after a Sex and the City trivia board game box was left on the steps of the park's Civil War monument: 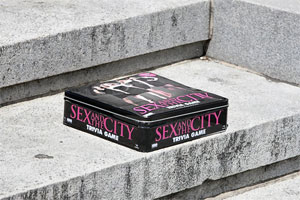 "A passerby reported the suspicious box to police about 2 p.m. and
police were standing by the box while waiting for a bomb disposal
expert to examine it. The box is a metal 'Sex and the City" trivia game container. A man
appeared to leave the game in the square at about 1:40 p.m., Lt. Joe
Cecile, of the Syracuse police, said. The box is on a step on the fountain side of the monument. The wind
blew florescent (sic) pink game cards into the square's fountain, where they
sank. Police first tried to track down the men and get them to return to
the park to open the box, Cecile said. That turned out to be
unsuccessful, he said."