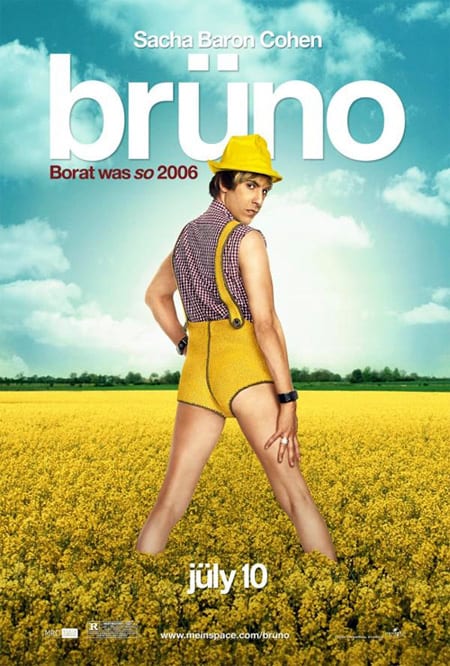 On Friday morning, Hollywood Daily was declaring Sacha Baron Cohen's Bruno a potentital $50 million hit: "Sacha Baron Cohen has done it again. Based on $1.6 million inpost-midnight shows in nearly 700 theaters this morning, and pre-salesfor its weekend release into 2,757 North American theaters, Brünolooks like a big hit for Universal.  'If it holds up, we'll do $50million,' one insider tells me. 'Yet this is a movie that people may ormay not attend spontaneously.' That's double the $25M to $27M whichUniversal and even rival studios have been predicting for themockumentary's weekend debut."

Turns out, Bruno did a not-so-shabby $30.4 million after plunging 37% in its box office from Friday to Saturday. TIME wonders if Twitter was the culprit:

"Bruno's box-office decline from Friday to Saturday indicatesthat the film's brand of outrage was not the sort to please mostmoviegoers — and that their tut-tutting got around fast. Bruno could be the first movie defeated by the Twitter effect."

Finally, was Bruno "below the belt" (as GLAAD suggests and CNN asks, AFTER THE JUMP) for you? Please let us know if you think Bruno enforced stereotypes, or were the bigots (or those who paid full price for a ticket) the butt of the joke?

Watch CNN's weekend report on gays and Bruno (and let us know how you felt),
AFTER THE JUMP…