Did the two-days-prior arrest of a man for public intoxication outside the Rainbow Lounge in Fort Worth inspire the violent police raid that left a bar patron in the hospital with a head injury? That's what the AP is suggesting, based on a police report. 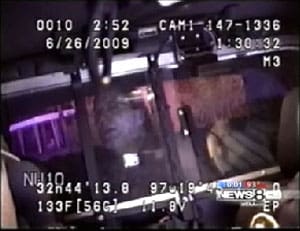 News 8 broadcast what they say is new footage of a man arrested two days prior in the back of a police cruiser. They report:

"According to
police records, a cruiser video showed a man arrested for public
intoxication two days before the controversial raid. In a police
report, officers said they saw the man leave the lounge very
intoxicated earlier in the evening and told him to get a ride. That weekend, officers returned to the lounge with TABC officers for a
bar check. A police radio recording revealed that an officer called for
help after they went inside the Rainbow Lounge. 'I need help in here,' he could be heard saying. 'I'm by the restroom.' That call came when officers said a customer blew a kiss at the
officer, and then struggled with police as they tried to arrest him.
The customer told News 8 his arm was injured. In police
records, officers also said a woman's hips touched an officer in a
sexually explicit way. The reports also said Gibson tapped an officer's
genitals. '[It] didn't happen,' Gibson said. 'It's a big lie.'"

In related news, I reported yesterday that Fort Worth Mayor Mike Moncrief apologized for the raid on the club. Moncrief later clarified his remarks. His apology was for the injuries Gibson sustained and not for the raid itself.

And city officials plan to ask the U.S. Attorney's office to expand its role in determining what happened at the raid.