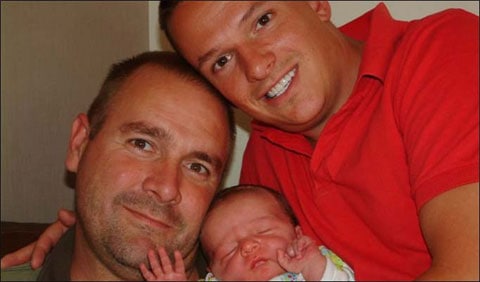 Hard to believe this is a first, but that's what media is reporting.

The Press Association reports: "Two gay police officers have had a baby boy after one of their
sisters agreed to act as a surrogate so they could become fathers, it
was revealed. Lorna Bradley, 31, volunteered to have their baby
when her brother Steven Ponder, 28, a special constable, revealed a
desire to start a family with Pc Ivan Sigston, 43. Both men, who
live together in Southampton, Hants, were present when mother-of-three
Mrs Bradley gave birth to William Campbell Ponder-Sigston last month at
her home in Worthing, West Sussex."

Writes The Sun: "PC Sigston, a former soldier with the Royal Tank Regiment, did not put his
name down as father – even though he donated the sperm. Instead, under the law both he and Steven will have to formally adopt the
little lad, whose full name is William Cameron Ponder-Sigston.
"