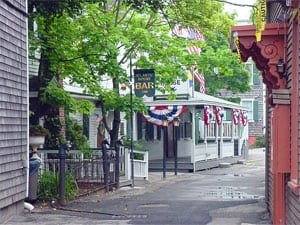 "I was shocked tonight to bump into a new friend, Mark, hobbling down the street. I was about to make a joke as I rode up behind him on my bike and then saw his face. It was a blur of blood and bruises. Friday night, he was leaving the Atlantic House – an historic gay pub in Ptown – when a group of three local kids hiding in an alley-way to target gays threw a bottle at his face and called him a faggot. He threw the bottle back and then they set upon him. He's not a slight guy, he's strong and built and bearded. But he was clearly reeling from the assault and will return to the hospital tomorrow. The cops apparently responded heroically and after a chase captured the assailants."

Anyone who has lived or visited Ptown knows what a facade of safety this town provides with its high population gays and lesbians. Some gay bashings occur here due to outsiders such as the attack on two lesbians back in May by a man from Winthrop, Massachusetts. Having lived year-round in Ptown I always had the feeling that the locals were fairly accepting of the unusual hybrid of sexualities and ethnicities that are the town's make-up. But I suppose there are isolated pockets of hate everywhere.

There is a July 31 hearing for Eric Patten of Winthrop in the May assault case.