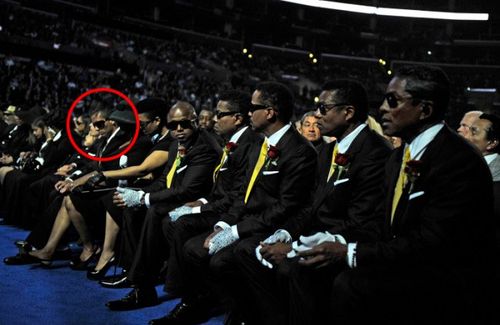 It has been noted that Norwegian rapper Omer Bhatti, long-rumored to be the son of Michael Jackson, was seated with the family at the memorial:

"Bhatti, 25, was sat (sic) in between Michael's son Prince and eldest sister
Rebbie, 59, in the front row of the service at the Staples Center in
Los Angeles on July 7…His appearance at the memorial and his physical similarities to
Michael's youngest son Prince Michael II, aka Blanket, has fuelled
speculation that he is the son of the legendary star. Omer has remained in LA since Michael's death and is believed to have
asked for a DNA test to prove once and for all if he is the singer's
love child…The Thriller singer reportedly told close friends several years ago
that he fathered Omer after a one-night stand with a Norwegian fan in
1984."