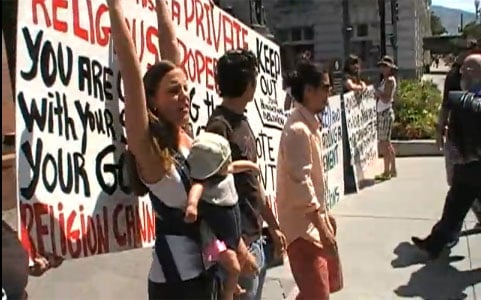 A third kiss-in/demonstration in two weeks was held near Salt Lake City's Mormon Temple on Sunday and drew a crowd of about 100 participants, according to the AP, as well as a group of "faithful Mormon" counter-protestors.

Videos of the confrontations, AFTER THE JUMP… 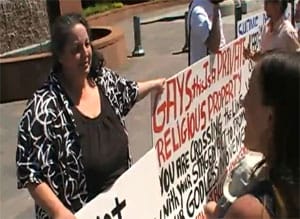 AP: "Police say no one was arrested or cited, despite a large group exchanging kisses by a reflecting pool at the plaza's center. Thechurch bought one block of Salt Lake City's Main Street to build aplaza in the 1990s alongside the Temple, where Mormon marriages andother religious rituals take place. Matt Aune has said he and hispartner, Derek Jones, exchanged a modest kiss at the plaza 11 days ago,but church officials contend their behavior was lewd."

In a statement released Friday, the Mormon Church defended two arrests made after a security guard observed two men kissing on a plaza near its Temple in Salt Lake City. The incident inspired a 'kiss-in' demonstration attended by hundreds. In the statement, which you can read below, the church claims "there was much more involved than a simple kiss on the cheek.[The men]  engaged in passionate kissing, groping, profane and lewd language, and had obviously been using alcohol." 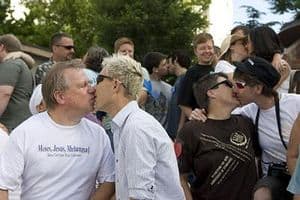 Said the church in its statement:

"There has been a good deal of publicity surrounding an incident where two men were cited for trespassing because of belligerent and profane behavior on the Church Plaza, which is an extension of the Salt Lake City Temple grounds and Church headquarters. While this property is owned by the Church, we want it to be a place of beauty and serenity in downtown Salt Lake City for everyone. As we said earlier on this matter, these men were asked to stop engaging in behavior deemed inappropriate for any couple on the Plaza. There was much more involved than a simple kiss on the cheek. They engaged in passionate kissing, groping, profane and lewd language, and had obviously been using alcohol. They were politely told that the Plaza was not the place for such behavior and asked to stop. When they became belligerent, the two individuals were asked to leave Church property. Church security detained them and Salt Lake City police were called. There is nothing satisfying in learning that there have been problems for anyone on Church property. We hope the Plaza will continue to be an asset to the community and enjoyed by the many that cross it each day."

Videos of the most recent demonstration, AFTER THE JUMP…