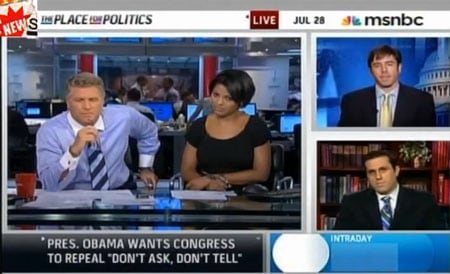 A new USA Today/Gallup poll showing 69% of Americans want the military gay ban lifted was discussed on MSNBC today. Arthur Delaney of The Huffington Post and Philip Klein, Washington Correspondent for the American Spectator discussed why the Obama administration has put it off.

And today, a new report from The Palm Center explains how the legislative process to repeal "Don't Ask, Don't Tell" has stalled and reiterates the importance of a two-pronged approach to ending the ban, first by executive order, then by legislative repeal. Here's the summary:

Throughout the winter and spring of 2009, attempts to repeal “don’t ask, don’t tell” remained stalled. Although candidate Obama had suggested that efforts to repeal the ban would begin when he became President, rhetoric shifted immediately after the inauguration as the White House spoke of the need to delay repeal initiatives, and then began to use conditional language about whether, not when, the administration would focus on repeal. Major gay rights groups who had taken candidate Obama at his word became increasingly frustrated at the lack of action; senior Congressional spokespersons confirmed that consideration of repeal was not imminent; and media coverage of the issue softened.

All of this changed in May, 2009 when a proposal was introduced in the public domain outlining a new, two- part strategy which would begin with an executive order suspending “don’t ask, don’t tell” followed by legislative repeal at a subsequent time. The proposal included a legal analysis showing that the President has stroke-of-the- pen authority to suspend the ban. The tone of media coverage shifted immediately once activists and journalists realized that the President could suspend “don’t ask, don’t tell”, and the White House was put on the defensive.

As momentum for executive action increased, however, a network of gay and gay-friendly activists, journalists and politicos worked to derail the possibility of a suspension of the ban. This policy analysis advances three points about these efforts to derail an executive order and focus exclusively on legislative repeal of “don’t ask, don’t tell.” In particular, it (1) explains the strategic misperceptions of those who seek to focus exclusively on legislative repeal including the flawed notion that the legislative strategy alone can work; (2) describes the consequences of efforts to block consideration of the two-part strategy (executive order first, legislative repeal second); and (3) suggests why a renewed emphasis on a two-part strategy is the most effective way forward.

Read the full report here (via politico). And here's the MSNBC segment:

You can read that here: Download DADT Truth Squad (PDF).