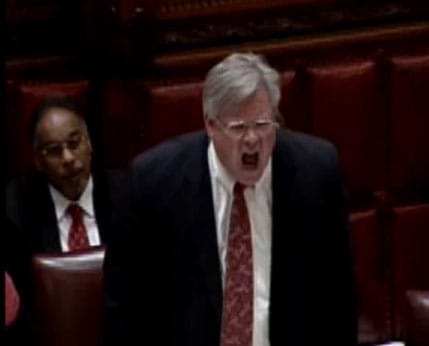 At around 3 am last night, New York State Senator Tom Duane, who is gay and HIV-positive, delivered a mesmerizing, emotional 21-minute speech on the Senate floor at the end of a marathon session in favor of a bill preventing people living with HIV or AIDS and receiving public assistancefrom having to pay more than 30 percent of their monthly income onrent.

The bill passed by a vote of 52 to 1. But not after Duane reminded people of the horrors of the early 80's:

"Visiting friends in hospitals. We'd go in. We'd go in one night, in themorning they'd be dead. I'd bring them food. My family, bring themfood. My friends bring someone food. But whoever was in bed would bedead before they could eat it. We'd leave it – maybe the nurses would take it home. No! Theywouldn't eat it! 'Cause it's contaminated. Contaminated! Wouldn't touchit. Wouldn't go into the room. Wearing masks. Gloves! Gowns! Someonegets sick in the afternoon. They'd be dead the next day. Dead! And thatwent on for months, and then years. Dead! Dead! You think if you got sick and your friends were dying that I wouldsit there and do nothing? No. But that's what happened. That's whathappened. Every cold. Every virus. Every temperature. I thought I'd bedead, and so did so many people that I knew. Dead! You think you scareme? You think you can make be back off? Nothing scares me."

Peter Staley writes of those living with HIV and AIDS: "There's a Tom Duane lurking deep down in all of us, waiting to be heard.

Watch Duane's speech, AFTER THE JUMP…