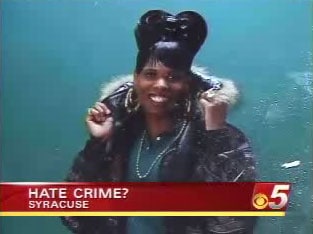 "[DeLee] becomes just the second
person in the U.S. convicted of a hate crime that involved the death of
a transgender victim. The Onondaga County Court jury delivered its verdict after deliberating for about six hours over two days. DeLee faces additional prison time because he was convicted of a hate crime. DeLee
was charged with second-degree murder as a hate crime. But Judge
William Walsh told the jury that it could also consider convicting
DeLee of manslaughter as a hate crime, as well as murder or
manslaughter without the hate crime element."

The National Gay and Lesbian Task Force released a statement regarding the verdict: "This verdict sends a strong message that hate violence will not be condoned. How many more like Lateisha Green must spill blood before our society says no to harassment, no to discrimination and no to violence against transgender people? We must move forward, at all levels of government, to pass laws that fight hate in schools, in workplaces and on the streets. We must continue working toward a culture that affirms the dignity and worth of all people. While no verdict will bring Lateisha Green back, justice was served today."