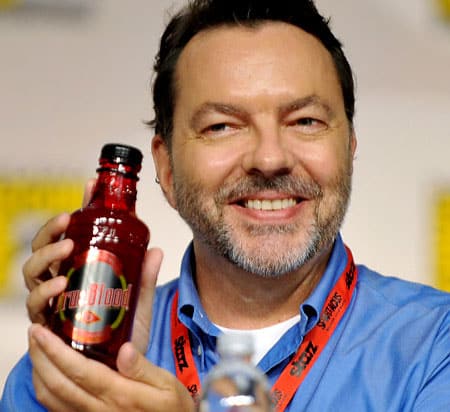 Tru Blood, the preferred synthetic blood drink of integrated vampires in HBO's Alan Ball series True Blood, is coming to a store near you in September:

"The blood-orange carbonated drink has a slightly tart and lightlysweet flavor that is sure to taste better than the O negative bloodconsumed by the show's fictional vampires. Crafted to replicatethe appearance of the synthetic blood beverage preferred by the undeadin the series, the real-life drink will also be called Tru Blood."

Ball introduced the beverage at Comic-Con, the NYDN reports: "[Ball] joked that the drink was a mixture of 'wine, vodka, Vicodin, Viagra and Ecstasy' and that it was 'completely illegal.'"

Tru Blood will cost $16 for a four-pack. It can be pre-ordered here.

EW's Michael Ausiello talks to Ball at Comic-Con, AFTER THE JUMP…