A new French trailer for I Love You, Philip Morris, starring Jim Carrey, Ewan McGregor, and Rodrigo Santoro, has been released and features a brief clip of the sex scene that caught Lewis Tice of TLA Releasing off guard. 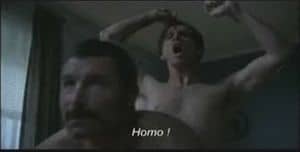 The movie is scheduled to be released around Valentine's Day.

In the film, an adaptation of the Steve McVicker novel I Love You Philip Morris, Jim Carrey plays Steven Russell,a married father/conman who finds himself in the Texas prison systemwhere he falls in love with his cellmate Phillip Morris. The romanceprompted four escape attempts and a lifetime jail sentence for Russell.