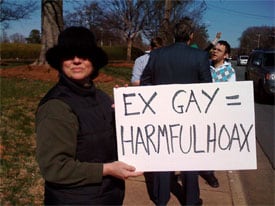 "There is no evidence to support the claims of some practitionersthat sexual orientation can be changed through therapy, a specialcommittee of the American Psychological Assn. reported today. Mentalhealth professionals should not tell patients that they can changetheir sexual orientation and instead should help them 'explorepossible life paths that address the reality of their sexualorientation,' according to the report, which was released at a Torontomeeting of the association and online."

The 138-page report released today is a result of a study by a six-person committee which began in 2007 following therapist claims that sexual orientation could be changed.

At that time, Focus on the Family and other right-wing groups sent a letter to the APA which read, in part: "We believe that psychologists should assistclients to develop lives that they value, even if that means theydecline to identify as homosexual."

The APA has chosen to go with reality.

Patrick McAlvey, a survivor of "ex-gay" therapy, talks about his bizarre and harmful experiences in a new video from Truth Wins Out, AFTER THE JUMP…