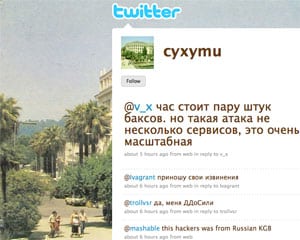 "The blogger, who uses the account name 'Cyxymu,' (the name of a town in
the Republic of Georgia) had accounts on all of the different sites
that were attacked at the same time, Max Kelly, chief security officer
at Facebook, told CNET News. 'It was a simultaneous attack across a number of properties targeting
him to keep his voice from being heard,' Kelly said. 'We're actively
investigating the source of the attacks and we hope to be able to find
out the individuals involved in the back end and to take action against
them if we can.'"

Mashable writes: "The claims cement earlier reports that social networking sites have been dragged into the Georgia-Russia crisis, leading to the first simultaneous attack on the largest social media sites."

The NYT reported yesterday: "Bill Woodcock, research director of the Packet Clearing House, a nonprofit technical organization that tracks Internet traffic, said the attack was an extension of the conflict between Russia and Georgia.

It was not clear who initiated the attack, Mr. Woodcock said, but it was likely that 'one side put up propaganda, the other side figured this out and is attacking them.' He said he found evidence that the attacks had originated from the Abkhazia region, a territory on the Black Sea disputed between Russia and Georgia.

Mr. Woodcock said the disruptions did not appear to have been caused by a botnet, or network of thousands of malware-infected personal computers."

Much more from ABC News….