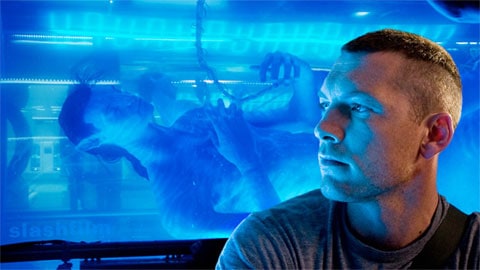 The trailer for Avatar has arrived. It's James Cameron's first return to filmmaking since Titanic, and stars Sam Worthington.

According to First Showing, "Avatar is the story of an ex-Marine who finds himself thrust intohostilities on an alien planet filled with exotic life forms. As anAvatar, a human mind in an alien body, he finds himself torn betweentwo worlds, in a desperate fight for his own survival and that of theindigenous people."

More on Avatar from Cinema Blend: "Already people arecomplaining that Sam Worthington's Avatar doesn't look realistic, thatthe blue skin looks fake, because they haven't had enough time to seeit move like a human, hear it talk, or see it respond to its world.Having seen it in Hall H, I promise it works. It just needs time tosettle in, and just by showing one complete scene at Comic Con, theysold the effect entirely. Cutting together all the random scenes in thetrailer just makes you more disoriented."

Thoughts? If this isn't working, you can watch it in HD here.