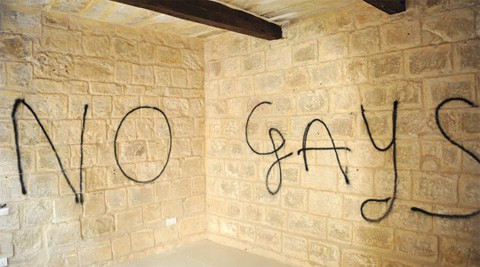 A 42-year-old man who divides his time between Malta and the UK and was restoring a property with his partner received a shock when he discovered that an intruder had "scaled down from a neighbouring roof" and left a message for him in graffiti on the walls: 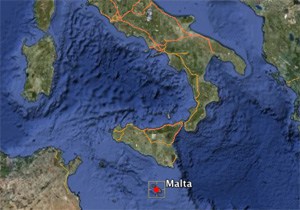 Said the man, who declined to give his real name to the Times of Malta: "I am afraid for my safety. Cleaning the walls myself has been cathartic. I would like to think it was either a 13-year-old or someone with that
mental capacity who did this. I hope it was not somebody seething with
hatred (towards gays) because that is not part of my language…Once a thief broke into my house when I was living in Italy and you
feel your privacy has been invaded, but this was more personal…I was trembling [when I spoke with police] and the officer's attitude was reprehensible. He never
asked me if I suspected anyone or any other details. For the police it
was a simple prank not a personal threat."

A recent article in the Malta Star reported that although estimates put the number of LGB people in the Southern European island nation at 15-30,000, many are afraid to come out and only 150 people, some of them straight, attended a recent gay pride parade there.

Malta does have a gay club, however: Klozet.