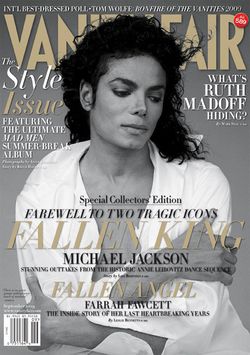 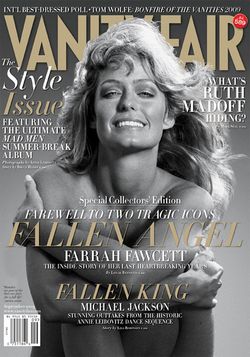 Michael Jackson and Farrah Fawcett appear on two separate covers for the September issue of Vanity Fair, being shipped to subscribers at random. They've also posted retrospective photo galleries on both MJ and FF. USA Today published a set of excerpts from the articles. 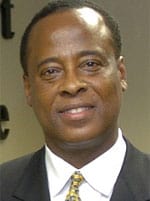 The latest news from the investigation of Jackson's doctor, Conrad Murray, is that Murray claims one of his aides gave Jackson a shot of Demerol which triggered cardiac arrest:

"Michael Jackson died after one of his aides gave him a shot of the painkiller Demerol, his personal doctor said. Dr Conrad Murray told police that he, himself, was asleep when Jackson was given the fatal dose. When the doctor woke up, the singer was dead, and he frantically tried to revive him, Dr Murray claims. It is believed that Dr Murray told police that earlier that day he
had given Jackson a shot  of surgical anaesthetic Propofol – also known
as Diprivan – but that he had woken up when the effects wore off and
demanded more medication. The unwitting aide gave him the shot of Demerol which then triggered a massive heart attack." 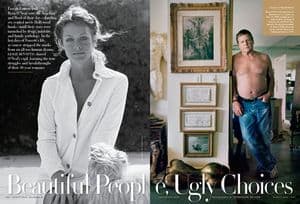 And here's a creepy story about Ryan O'Neal from the Vanity Fair profile on Farrah:

"While it’s clear that O’Neal is no angel, he’s at least willing to cop to his own flaws. At one point, he describes himself as 'a hopeless father' and offers as evidence this anecdote from Fawcett’s funeral: 'I had just put the casket in the hearse and I was watching it drive away when a beautiful blonde woman comes up and embraces me,' Ryan told me. 'I said to her, ‘You have a drink on you? You have a car?’ She said, ‘Daddy, it’s me—Tatum!’ I was just trying to be funny with a strange Swedish woman, and it’s my daughter. It’s so sick.' … 'That’s our relationship in a nutshell,' Tatum said when I asked her about it. 'You make of it what you will.' She sighed. 'It had been a few years since we’d seen each other, and he was always a ladies’ man, a bon vivant.'"