A woman in Cameroon has been discovered to have a new strain of HIV, which originated in gorillas rather than chimpanzees, the BBC reports: 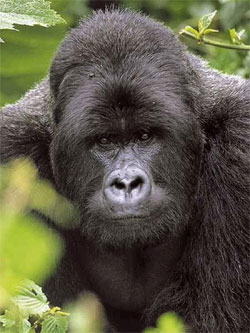 "A researcher told the BBC that, though it was a new type of HIV, current drugs might still help combat its effects. HIV originated from a similar virus in chimpanzees called Simian Immunodeficiency Virus (SIV) Although HIV/Aids was first recognised by scientists in the 1980s,
it is thought to have first entered the human population early in the
20th Century in the region of the Democratic Republic of Congo. The virus probably originally jumped into humans after people came into contact with infected bush meat. SIV viruses have been reported in other primates, including gorillas. French doctors treating the 62-year-old Cameroonian woman who was
living in Paris said they initially spotted some discrepancies in
routine viral load tests. Further analysis of the HIV strain she was infected with showed it
was more closely related to SIV from gorillas than HIV from humans."

Researchers report that studies have shown the virus can replicate in human cells and presume there are more cases since the woman, who shows no signs of AIDS at this point, had no contact with bush meat, or gorillas.