The belly is back, at least in Brooklyn, according to the NYT: 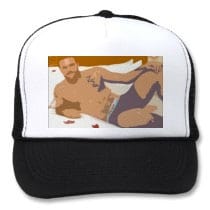 Hipsters, by nature contrarian, according to Dan Peres, the editor of Details, may be reacting in opposition to a president who is not only, as the press relentlessly reminds us, So Darn Smart, but also hits the gym every morning, has a conspicuously flat belly and, when not rescuing the economy or sparring with Kim Jong-il, shoots hoops. 'If we had a slob in the White House, all the hipsters would turn into some walking Chippendales calendar,' Mr. Peres said. Instead, the streets of Williamsburg are crowded with men who are, as he noted, 'proudly rocking a gut.' Mr. Peres’s magazine has a term for these people: the new 'poor-geoisie.' But the people lining up for $13 lobster rolls at the Brooklyn Flea last weekend hardly looked as if they were worried about making the rent. 'I sort of think the six-pack abs obsession got so prissy it stopped being masculine,' is how Aaron Hicklin, the editor of Out, explains the emergence of the Ralph Kramden. What once seemed young and hot, for gay and straight men alike, now seems passé. Like manscaping, spray-on tans and other metrosexual affectations, having a belly one can bounce quarters off suggests that you may have too much time on your hands.' It’s not cool to be seen spending so much time fussing around about your body,' Mr. Hicklin said.

And so guys can happily and guiltlessly go to seed."

Choire Sicha's been sitting on his Brooklyn doorstep, taking count.

In related news: the fat that makes you thin.

Previous Post: « Lieutenant Dangle Hanging Up His Short Shorts
Next Post: Levi Johnston Fine with Being a Gay Pin-up Boy »