USA Today reports on a speech to the American Psychological Association by Cornell University's Ritch Savin-Williams, who says it's much harder to determine "who's gay" in culling study participants for psychology research on sexuality because teens classify themselves in much broader ways today: 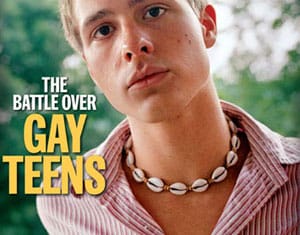 "For example, estimates could range from as few as 1% of the population
to as many as 21%, because many young people do not actually say
they're gay, even though they talk about sexual encounters with
same-sex partners or same-sex romantic attraction. In his presentation, Savin-Williams cited
several studies on the way teens categorize their sexual preferences
and behavior, to illustrate the difficulties researchers have in
studying adolescent sexuality. Some describe themselves as 'mostly
heterosexual.' He also explained that new research isn't
finding some of the differences that have in the past suggested gay
youth are more at risk for mental health problems than other teens. He cited one recent study, for example, that
found no greater delinquency or risk for substance abuse among gay
youth, despite reports about greater risk in earlier research. 'Not all gay youth are less healthy than
heterosexuals, but there is a sub-population of same-sex oriented
individuals who are accounting for nearly all the mental health
differences between gays and straights,' he says."

Savin-Williams is the author of The New Gay Teenager.