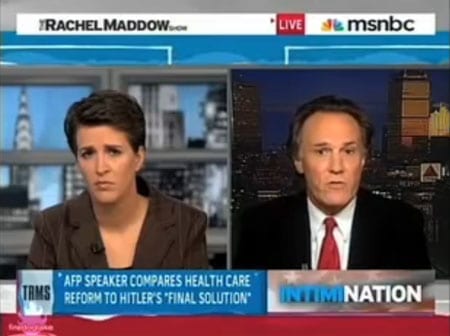 On Friday, Rachel Maddow talked to author Frank Schaeffer about the desperate right-wing town hall mobs and the dangerous, irresponsible coded messages they are sending to the lunatic fringe which implicitly call for politically-motivated violence.

Says Schaeffer: "The Glenn Becks of this world literally are responsible for unleashing what I regard as an anti-Democratic, anti-American movement in this country that is trying to shut down legitimate debate and replace it with straight-out intimidation."