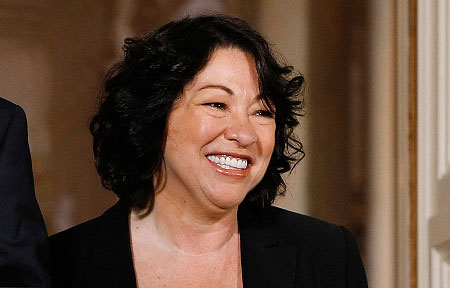 Sonia Sotomayor was confirmed on a 68-31 vote by the Senate today, making her the nation's 111th Supreme Court justice, the third woman, and the first of Hispanic descent to serve on the Court: 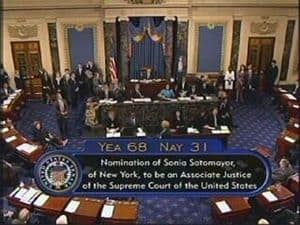 "In a sign of the increasing partisan tension to battles over SupremeCourt nominations, the 31 Republican votes against Sotomayor faroutnumbered the GOP opposition to the Clinton administration's SupremeCourt justices in the early 1990s, Ginsburg and Stephen G. Breyer. But it was a similar to the level of Democratic opposition to GeorgeW. Bush's nominees earlier this decade: Chief Justice John G. RobertsJr. received 22 'no' votes from Democrats in 2005, while AssociateJustice Samuel Alito received more than 40 'no' votes from Democrats in2006."

Watch the vote tally and announcement, AFTER THE JUMP…