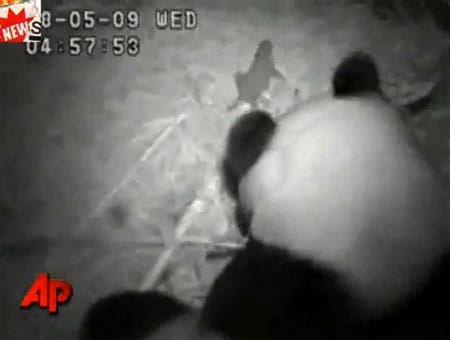 "She had appeared more restless than usual in the last 24 hours,resting for shorter periods with intermittent nest building through theday and night. At about 2:45 this morning, she was observed leaningback and holding her feet. Regular changes of position become common atthis stage of labor, and contractions were evident as the time went by.Bai Yun handled it all well, and staff agreed that this seemed like oneof her easiest labors. At 4:58 a.m., Bai Yun stood up and had a series of contractionswhile on all fours. With the last one, we suddenly heard the loudsquawking we had all been anticipating. As Bai Yun turned around togather up the cub, we all got a glimpse at a wriggling infant on thefloor, crying loudly for attention. Bai Yun immediately attended to hernewest offspring and spent the next half hour or so soothing it,cradling it in her arms and licking it."

Writes the L.A. Times: "Pandas' reproductive systems are still largely a mystery toresearchers, so even zoo staff, who'd been monitoring Bai Yun extremelyclosely, didn't know when she would give birth."