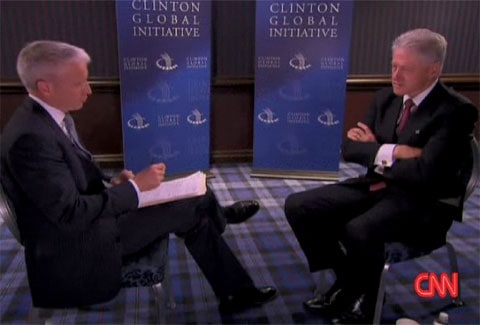 Anderson Cooper interviews former President Bill Clinton in a segment airing tonight (10pm ET) on AC360. Anderson asks Clinton about his recent statements about same-sex marriage, and why he changed his mind.

In Toronto in May, while on a speaking tour with George W. Bush, Clinton described his position on same-sex marriage as "evolving". More recently, speaking at the Campus Progress National Conference in Washington,D.C., Clinton said, "I'm basically in support" of it.

In his most extensive remarks to date, Clinton now says he was "wrong" about same-sex marriage and was "hung up about the word."

Towleroad has obtained an advance transcript of Anderson Cooper's interview with Clinton. You can read it below, and watch a short clip, AFTER THE JUMP… 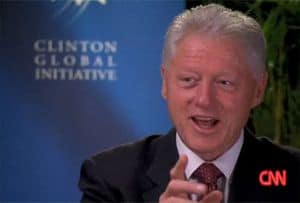 AC: You said you recently changed your mind on same-sex marriage. I’m wondering what you mean by that. Do you now believe that gay people should have full rights to civil marriage nationwide?

CLINTON: I do. I think that, well let me get back to the last point, the last word. I believe historically, for two hundred and something years, marriage has been a question left to the states and the religious institutions. I still think that’s where it belongs.

CLINTON: That is, I was against the constitutional amendment to ban gay marriage nationwide, and I still think that the American people should be able to play this side in debates.

CLINTON: But me, Bill Clinton personally, I changed my position. I am no longer opposed to that. I think if people want to make commitments that last a lifetime, they ought to be able to do it.  I have long favored the right of gay couples to adopt children.

AC: What made you change your mind? Was there one thing?

CLINTON: I think, what made me change my mind, I looked up and said look at all of this stuff you’re for. I’ve always believed that—I’ve never supported all the moves of a few years ago to ban gay couples from adoption. Because they’re all these kids out there looking for a home. And the standard on all adoption cases is, what is the best interest of the child?

CLINTON: And there are plenty of cases where the best interest of the child is to let the gay couple take them and give them a loving home. So I said, you know, I realized that I was over 60 years old, I grew up at a different time, and I was hung up about the word.

CLINTON: That our society has an interest in coherence and strength and commitment and mutually reinforcing loyalties, then if gay couples want to call their union marriage and a state agrees, and several have now, or a religious body will sanction it, and I don’t think a state should be able to stop a religious body from saying it, I don’t think the rest of us should get in the way of it.

CLINTON: I think it’s a good thing not a bad thing.  And I just realized that, I was, probably for, maybe just because of my age and the way I’ve grown up, I was wrong about that. I just had too many gay friends. I saw their relationships. I just decided I couldn’t, I had an untenable position.