Jake Raynard is in the hospital undergoing surgery following a brutal homophobic attack by a gang of men early Saturday in which he suffered15 cheekbone fractures, and a broken jaw, eye socket, and upper palate, tbnewswatch reports: 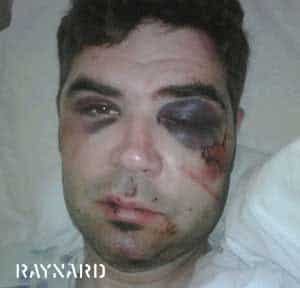 "Raynard, 30, and two friends were smoking outside of a bar after
last call when a man approached them for a cigarette. The three friends
walked away from the man after he became aggressive. Raynard said as
they walked toward the Water Street Bus Terminal a group of males
followed them shouting derogatory comments about their sexual
orientation. 'It was like they were waiting in the
woodwork,' said Raynard, who is gay, from his hospital bed. 'The crowd
just seemed to get bigger.' One of the men grabbed Raynard's
friend and started choking him. Raynard said he struck the man that was
assaulting his friend and then began yelling at the group to try and
scare them away. 'I managed to fend off six to eight people
by yelling long enough to get them (Raynard's two friends) into a cab,'
said Raynard. Once his friends were in the cab, Raynard said
the group surrounded the taxi, preventing him from getting in. He
decided to run through a nearby alley towards a local restaurant
instead, grabbing a brick for self-defense as the men chased him. 'I was screaming loud enough to wake up six blocks,' said Raynard. 'How did nobody hear me?'  He
said the last thing he remembers is banging on the window of a nearby
fast-food restaurant for help before waking up in the emergency room of
Thunder Bay Regional Health Sciences Centre on Saturday afternoon."

Thunder Bay is the largest city in northwest Ontario.