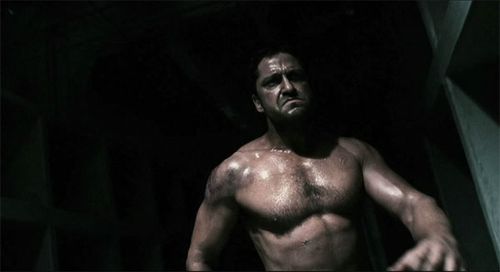 Gerard Butler tells Shortlist magazine about the funniest moment on the set of his film Gamer:

"This is going to show my maturity now, I wrote to the two
directors separately. I wrote that me and the stunt guys are having a
blast and sent them half a dozen donuts each as a thank you. They were
so chuffed. The next day we got six fresh donuts and shoved them
between our ass cheeks… and took a Polaroid. [Butler is in fits] We
sent this snap to the directors and sure enough, they thought they’d
been eating the very same sugary treats. They freaked out, man…I told you it was going to show my maturity. It was my
birthday that day, and in the evening about ten of the cast also
dropped trousers to reveal Happy Birthday Gerry written across their
cheeks. Come to think of it, there was a little too much ass in the
making of this film."

I wonder if they were jelly, powdered, or glazed?