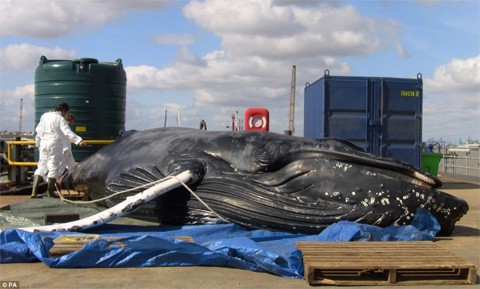 A humpback whale was found dead in the Thames River just outside London last Thursday:

"The 9.5m-long (28ft) juvenile male whale was first spotted in the River Thames on Thursday, but was not seen again until it was found dead on Saturday morning near Dartford Bridge.

Initial examination suggests the humpback, the first to have been found in the Thames, may have died of starvation.

Scientists from The Zoological Society of London (ZSL), which manages the UK Cetacean Strandings Investigation Programme, said the beaching of the humpback whale was an 'incredibly unusual event'."