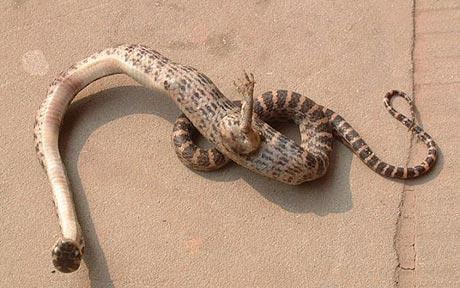 Not how I'd want to be awakened:

"Dean Qiongxiu, 66, said she discovered the reptile clinging to the wall of her
bedroom with its talons in the middle of the night. 'I woke up and heard a strange scratching sound. I turned on the light
and saw this monster working its way along the wall using his claw,'
said Mrs Duan of Suining, southwest China."

It's apparently a mutation and not some kind of new, undiscovered, stuff-of-nightmares species (or Photoshop creation, though I'm suspicious). Still, I think it'd be 'lights on' for a few weeks after that experience.