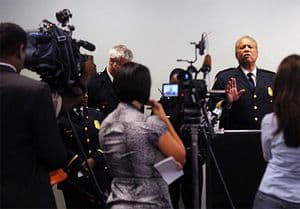 "According to police records, undercover vice officers had been to the club and
witnessed men having sex together while other patrons watched. The
department received its first complaints about the club in May and sent
officers there undercover on two occasions before the Sept. 10 raid,
Pennington said…Pennington said no search warrant was served prior to the raid and that
patrons were 'frisked' for the officers’ safety. All told, nine undercover
officers and a dozen uniformed officers participated in the raid. The team
brought three jail vans to the bar and used members of the Red Dog unit to
assist with the arrests."

Said Atlanta Eagle lawyer Alan Begner: "What happened to the customers was an assault. They were not
free to go. There was no suspicion any of them had committed a crime. This
is unbelievable. These customers are on their stomachs facedown in the grime and spilled beer
for an hour, two hours, all this done for no apparent reason."

Disgusting. A protest that attracted hundreds was held outside the Atlanta Eagle on Sunday — I posted video from it here this morning.

Previous Post: « Snake with Leg and Clawed Foot Found in China
Next Post: Mehcad Brooks Won’t Get Married Till Gay People Can »