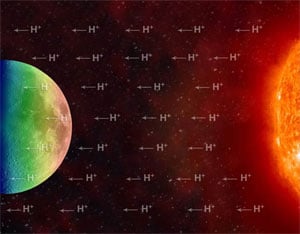 "The new findings, detailed in the Sept. 25 issue of the journal Science, come in the wake of further evidence of lunar polar water ice by NASA's Lunar Reconnaissance Orbiter and just weeks before the planned lunar impact of NASA's LCROSS satellite, which will hit one of the permanently shadowed craters at the moon's south pole in hope of churning up evidence of water ice deposits in the debris field.The moon remains drier than any desert on Earth, but the water is said to exist on the moon in very small quantities. One ton of the top layer of the lunar surface would hold about 32 ounces of water, researchers said."

Scientist believe charged hydrogen ions transported to the Moon on solar wind may be responsible for the water's existence.

Writes Scientific American: "Water and hydroxyl are related molecular species and have similar spectroscopic signatures—the wavelengths characteristic of each reside nearby in the infrared portion of the electromagnetic spectrum. The three-micron absorption band indicative of water appeared broadly across the lunar surface in spectrometric data taken by the Moon Mineralogy Mapper (M3), an instrument that circled the moon aboard India's Chandrayaan 1 spacecraft until the orbiter's mission ended prematurely last month. "

NASA's LCROSS satellite is scheduled to impact the Moon on October 8.

A Times Now report, AFTER THE JUMP…