Adam Lambert has revealed new details about his forthcoming album, For your Entertainment. 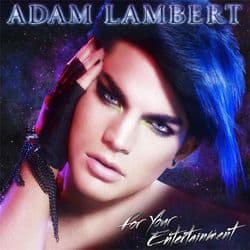 Says Lambert on Twitter: "Well here's some more album info for you guys! The upcoming single was produced by Dr Luke!!…There is also a song called 'Soaked' written by Muse! Also a tune called 'Music Again' written by Justin Hawkins of the Darkness!…I also wrote on four songs on the album. 'Strut', 'Aftermath' 'Broken Open' and 'Down the Rabbit Hole' (iTunes bonus track)…I'm so excited for you all to hear it!!!!…Debut single is called 'For Your Entertainment' get ready to shake yo asses to this song. It'll make ya dance for sure."

As far as the album's "glam" cover goes, Lambert says, "Thank you to those who appreciate and understand that the album cover is deliberately campy. It's an omage (sic) to the past. It IS ridiculous. For those that don't get it: oh well… Glad to have gotten your attention."