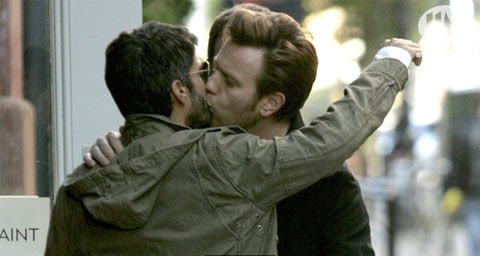 Ewan McGregor was spotted greeting a man with a kiss yesterday in New York. A friendly kiss.

However, he's not opposed to the more intimate kind. The L.A. Times recently asked McGregor if he thinks America is ready for his prison romance film I Love You Phillip Morris.

Said McGregor: "It seemed to go down very well there at Sundance. It's a love story, an
escape movie and a comedy, all about this man who goes to incredible
lengths to be with the man he loves. I like it because it's a gay film,
which is to say it's a film about two men in love, and I think that's
an important element of it. But it's not a film about them being gay.
They just happen to be gay. I also got to French kiss Jim Carrey a lot,
and I quite like that too."

That film is due out in February.

Previous Post: « Voices from the National Equality March
Next Post: Hate Crime Vigil to Take Place in London on October 30 »