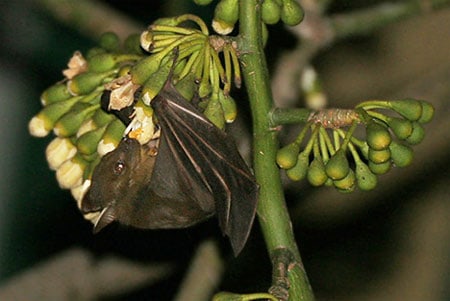 "New research published in the online journal PLoS ONE demonstrates for the first time that a non-human adult animal species regularly engages in oral sex behavior. While the behavior has been seen in juvenile animals before(both heterosexual and homosexual bonobos), this is the first time it has been observed in adult animals…The field research, which was conducted in Guangzhou City, China, reveals that in the case of the greater short-nosed fruit bat (Cynopterus sphinx) female species-on-male species oral sex now has been documented as a regular occurrence. Scientists observed that in instances where oral sex was performed, copulation time increased."

No male-on-male behavior has been observed among the bats.