It's little surprise that the Prime Minister of a country where open gays are regularly attacked and persecuted by mobs would be against same-sex marriage, but PM Bruce Golding has come out and made a strong statement to that effect. 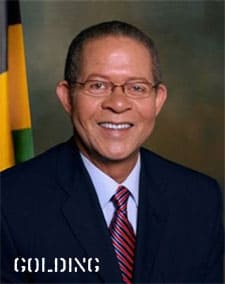 Said Golding in a debate yesterday regarding "a major proposed amendment to the constitution which would lay out the scope of rights and freedoms for Jamaicans": "I make no apology in saying decisively and emphatically that the
government of Jamaica remains irrevocably opposed to the recognition,
legitimization or acceptance of same-sex marriages or same-sex unions. There is the possibility that sometime in the future parliament could
pass a law that says same-sex unions are legal but it won't be done in
this parliament. Not as long as I sit here."

The AFP reports: "Golding, who in 2007 told the BBC he would not allow gays to sit in
his cabinet, said he does not believe it is the business of government
to 'interfere in what two consenting adults chose to do within their
own protected privacy.' But he stressed 'I will not accept it that
homosexuality must be accepted as a legitimate form of behavior or the
equivalent of marriage.' He acknowledged to parliament that his
stance could prompt the "aggressive" international gay-rights lobby to
continue attempts to discourage tourists and investors from traveling
to Jamaica. 'But we remain steadfast in our determination that the values and culture must be protected and preserved,' Golding said."