Morehouse College launched a new dress code this week that is getting a lot of attention. The new guidelines at the all-male college forbid "wearing hats in buildings, pajamas in public, do-rags, sagging pants, sunglasses in class and walking barefoot on campus". They also ban cross-dressing: 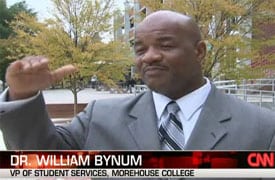 "The dress-wearing ban is aimed at a small part of the private college's 2,700-member student body, said Dr. William Bynum, vice president for Student Services. 'We are talking about five students who are living a gay lifestyle that is leading them to dress a way we do not expect in Morehouse men,' he said.Before the school released the policy, Bynum said, he met with Morehouse Safe Space, the campus' gay organization.' We talked about it and then they took a vote,' he said. 'Of the 27 people in the room, only three were against it.'There has been a positive response along with some criticism throughout the campus, he said." 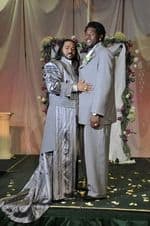 Morehouse was recently in the news for firing an administrative assistant after she sent an email from work computers that reportedly contained derogatory remarks about the photos of a gay wedding.

At the time, Morehouse President Robert Franklin sent out an email about the school's anti-discrimination policies. Said the note: "The views expressed in the e-mail entitled, 'The WTD of the Week,'(September 28, 2009) were the personal views of one individual and donot reflect the values or policies of Morehouse College. MorehouseCollege has a no-tolerance position on discrimination, includingdiscrimination on the basis of sexual orientation, and the College hastaken great strides toward building a diverse and tolerant community.After investigating the matter, the College has disciplined the personsinvolved in the incident, and one of the implicated employees is nolonger with the College. In addition, the College has reminded itsstaff that the Morehouse e-mail system is College property, should besafeguarded as any other College property, and that e-mails that arediscriminatory, inflammatory, or derogatory to any group are prohibitedat the College."

Watch CNN's report on the new dress code, AFTER THE JUMP…