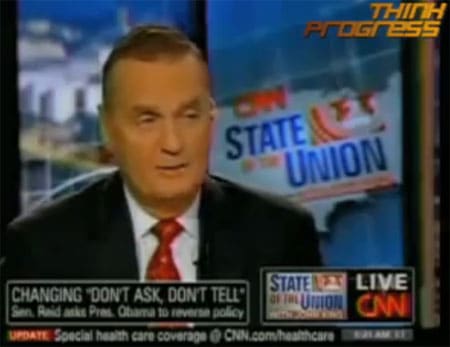 On State of the Union, CNN's John King asks National Security Adviser Jim Jones if it's time for the President to get involved in the repeal of the ban on gays in the military.

Says Jones: "The President has an awful lot on his desk. I know this is an issue that he intends to take on at the appropriate time. He has already signaled that to the Defense Department. The Defense Department is doing the things it has to do to prepare, but at the right time, I’m sure the President will take it on…Um, I don’t think it’s going to be — it’s not years, but I think it will be teed up appropriately."

Previous Post: « Lady Gaga and Madonna do SNL: ‘What the Hell is a Disco Stick?’
Next Post: Man Held in Connection with Murder of Jamaican Envoy John Terry »