Appearing before a packed and welcoming room at the Human Rights Campaign's annual dinner in Washington, President Obama delivered a speech strong on rhetoric that did not make any new promises or commitments. In his strongest language to date he promised the crowd, as he has in the past, that he would end the military's "Don't Ask, Don't Tell" policy, but did not offer any timeline for doing so. 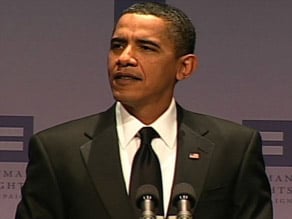 Obama spoke about the Employment Non-Discrimination Act (ENDA) and promised to defend any of his employees from attacks based on who they are, a likely reference to Safe Schools Chief Kevin Jennings, who has been under attack from anti-gay right-wing and religious groups. He also trumpeted recent House passage of a federal hate crimes bill and promised to sign it once it reaches his desk.

Obama also did not directly reference Question 1 in Maine or Referendum 71 in Washington state, two ballot measures that would remove rights from LGBT citizens on either coast, but offered broader promises to fight against the lies and divisiveness of foes of equality, suggesting that religion-based bigotry has no place in the national debate.

The President discussed his commitment to gay and lesbian families, using as an example his invitation to allow them to roll Easter Eggs at the White House.

The most amusing moment of Obama's speech came at its opening, when the President said, "It is a privilege to be here tonight to open for Lady Gaga." Finally, the President said that "friends should be able to be honest with one another" and he supports those who hold his feet and those of Congressional leaders to the fire over campaign promises.

What are your thoughts on the speech?

Previous Post: « David Mixner at the National Equality March: If We Don’t Hear Something New from Obama it Will Be a Disaster
Next Post: Boyzone Singer Stephen Gately Found Dead »