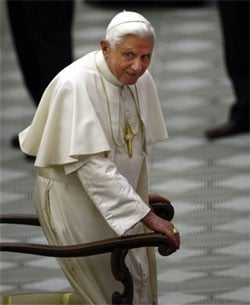 "Pope Benedict on Tuesday took a major step to make it easier for
disaffected Anglicans who feel their Church has become too liberal to
convert to Roman Catholicism. The move comes after years of discontent in some sectors of the
77-million-strong worldwide Anglican community over the ordination of
women priests and homosexual bishops…The Vatican said the Pope had approved a document known as an 'Apostolic Constitution' to accept Anglicans who want to join
Catholicism, either individually or in groups, while maintaining some
of their own traditions. It marks perhaps the clearest and boldest institutional step by the
Vatican to welcome disaffected Anglicans into the fold since King Henry
VIII broke with Rome and set himself up at the head of the new Church
of England in 1534. The new structure allows for the appointment of leaders, usually
bishops who will come from the ranks of unmarried former Anglican
priests, to oversee communities of former Anglicans who become
Catholics and recognize the pope as their leader."

And (fresh from his 700 Club appearance) one-man Catholic League President Bill Donohue, the Pope's biggest mouthpiece in America, penned a guest column for the Washington Post. Some excerpted gems: 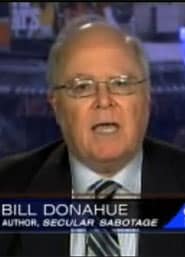 — "Sexual libertines, from the Marquis de Sade to radical gay activists,
have sought to pervert society by acting out on their own perversions.
What motivates them most of all is a pathological hatred of
Christianity. They know, deep down, that what they are doing is wrong,
and they shudder at the dreaded words, "Thou Shalt Not." But they
continue with their death-style anyway."

— "The ACLU and Americans United for Separation of Church and State
harbor an agenda to smash the last vestiges of Christianity in America.
Lying about their real motives, they say their fidelity is to the
Constitution. But there is nothing in the Constitution that sanctions
the censorship of religious speech. From banning nativity scenes to
punishing little kids for painting a picture of Jesus, the zealots give
Fidel a good run for his money. Catholics were once the mainstay of the Democratic Party; now the
gay activists are in charge. Indeed, practicing Catholics are no longer
welcome in leadership roles in the Party: the contempt that pro-life
Catholics experience is palpable. The fact that Catholics for Choice, a
notoriously anti-Catholic front group funded by the Ford Foundation,
has a close relationship with the Democrats says it all."

— "The culture war is up for grabs. The good news is that religious
conservatives continue to breed like rabbits, while secular saboteurs
have shut down: they're too busy walking their dogs, going to
bathhouses and aborting their kids. Time, it seems, is on the side of
the angels."