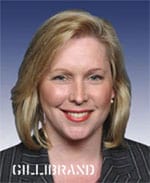 “As a New York progressive, Senator Gillibrand strongly believes in equal rights for all.

Since her time in the House of Representatives, she has spoken out in support of full marriage equality,

becoming one of the first members of the U.S. Senate to favor full marriage rights for same sex couples.

In the U.S. Senate, Senator Gillibrand is working on an aggressive agenda to provide equal rights for all,

including eliminating the 'Don't Ask, Don't Tell' policy in our armed forces, protecting people of all sexual

orientations and gender identities from hate crimes and employment discrimination, and repealing the

Defense of Marriage Act. This event is an opportunity for New York City’s Lesbian, Gay,

Bisexual and Transgender community leaders to meet your new Senator,

learn more about her agenda and discuss your priorities.”

Towleroad is going to be speaking to Senator Gillibrand on Sunday as well. Feel free to post any suggestions for questions you'd like the Senator to answer in the comments. I can't guarantee we'll ask them but we'd love to hear them.