Chris Aller, a TABC agent who was fired following the June raid on Fort Worth's Rainbow Lounge, says gays weren't specifically targeted for the raid, and maintains his claim that he was groped by Chad Gibson, a patron who sustained head injuries during the incident. 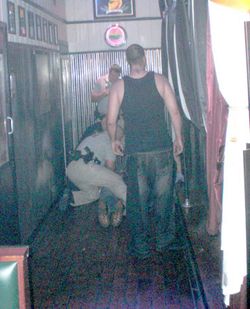 "'We went through looking for intoxicated people,' said Chris Aller, a former agent with the Texas Alcohol Beverage Commission. 'That's what we were looking for.'

Aller, another TABC agent and seven Fort Worth police officers inspected two other bars the night of June 28 and decided to stop by the Rainbow Lounge because it was new and close, he said in an interview Tuesday.

When asked directly if officers targeted the bar because it catered to gays, he said, 'No, not even close.' 'Actually I have quite a few friends who are homosexual,' he said. 'I lived with a couple gay guys in college. They were roommates.'

The raid sparked protests and quickly erupted into a national controversy after patrons complained that police seemed hyped up and looked for a fight. 'I was not Rambo. I like that quote,' Aller said. 'I was doing what I was trained to do.'

But he admitted the timing was unfortunate."

As for Gibson: "Aller said Gibson groped him with the back of his hand while he was walking in a back hallway. 'I
mean not hard, but he hit me. I mean, my badge was right here, so it
was obvious he knew who I was,' he said, pointing to the front part of
his belt."

I don't know about you, but I've never groped anybody with the back of my hand.

Previous Post: « Ricky Martin with the Sun and the Son
Next Post: Fresh From a Produce Aisle in Queens… »